HomeGeneralOntario PNP, a Most popular destination for 2020

Ontario PNP, a Most popular destination for 2020

Ontario PNP, a Most popular destination for 2020

Ontario province is Canada’s most popular destination for newcomers. As it is heaven for immigrants, Toronto city is a growing tech-jobs sector. Province is throughout helping immigrants through Provincial Nominee Program streams. Ontario PNP is considered a pathway to Permanent Residency.

Detailed overview of Ontario PNP in 2020

Here we will provide you Ontario Immigrant Nominee Program and PNP activity in 2020. Almost 7,350 nominations for the Ontario province were allocated for the previous year. And 250 additional nominations to Ontario’s NOC C pilot to Federal-Provincial partnership. This thing was for in-demand lower-skilled workers who have job offers. A total of 7,600 nominations are issued for 2020 as in November OINP met its quota. In fact, 450 more nominations are issued before the end of 2020 and total nominations reached 8,054.

Along with this OINP also include 7,249 dependents and spouses nominated for 2020.

Nominations are issued in the following streams: 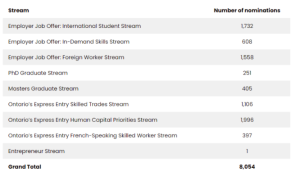 Nominated applicants are from over 130 countries but the top ten are mentioned below: 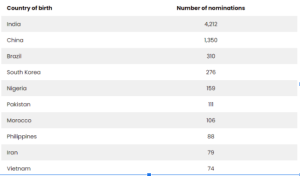 According to the need in the labor market, OINP issued nominations in technology-related occupations. Almost 20% of nominations are to applicants with work experience or job offer in any high-tech occupation which includes:

How can we help you?

We as Immigration Consultants are always here to guide our worthy clients regarding their Immigration and travel queries.